Hans the French Bulldog has his cleft palate repaired 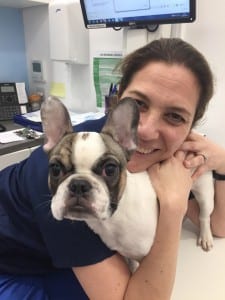 Chantel Mawbey fell in love with Hans when she met him as a very young puppy. He was being fostered by a colleague who worked with animals with special needs. Hans had been surrendered by his breeder to Chantel’s colleague, in the knowledge that he had a cleft palate (a hole between the roof of his mouth and nasal passages).

Chantel took Hans on. As a trained veterinary technician, she was aware that he was at risk of developing aspiration pneumonia from food tracking from his mouth into his nasal passages. She gave him lots of TLC and hand-fed him every few hours, including through the night. He was taken off his milky diet which would be too easily aspirated, and put onto solid food, and Chantel ensured that the roof of his mouth was cleaned after every meal.

The cleft, approximately 4mm in diameter, ran the length of his hard and soft palate. He had a little growing up to do before he was old enough to deal with an operation at four months.

Chantel took him to see Dr Janet Kovak McClaran, Head of Surgery at boutique animal hospital London Vet Specialists (LVS) in Belsize village in London. Together, they agreed on surgery to his palate, with the procedure to take place in mid-October.

Given that he was brachycephalic (having a shortened muzzle and airways), Hans was likely to need ventilation during surgery. Residency-trained veterinary anaesthetist Karla Borland oversaw his general anaesthetic, placing him in safe hands. LVS’s state-of-the-art medical equipment includes intensive care facilities such as ventilation and cage-side oxygen therapy, as well as multi-parameter continuous monitoring, including ECG and direct arterial and central venous blood pressure monitoring. Its team also includes a number of registered veterinary nurses with post-graduate qualifications specifically in intensive care, who are on hand to provide constant professional care.

The mouth is a very difficult area for surgery as gaining access can be tricky. Additionally, the tissue in the mouth is very delicate and prone to healing problems as there is little redundant tissue to work with and it is subject to constant motion as patients move their jaws and tongue.

Happily, Hans made an excellent recovery after the first procedure to close his cleft with a mucosal flap. He stayed overnight at LVS and suffered no significant respiratory issues. The next morning, he was bright, alert and responsive and ate his food with no problem.

Chantel collected him and they returned home. By January, he was continuing to do well. He was booked in for castration and reinforcement of the original surgery site. He again stayed overnight and was bright and eating well again quickly. Both his operation sites healed nicely.

Hans hasn’t looked back since and is back to being his bouncy puppy self. 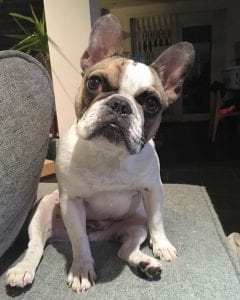 Little Hans is all-grown-up! At the time of writing, he’s almost a year and a half now and is doing so well. He loves his walks and you would never know he had such a fragile start to his life. Obviously, as he grows, so too does his palate, and so he has regular check-ups to ensure that the defect doesn’t reappear, necessitating further surgery. But he’s in good hands. We’ll keep you posted on his progress.