Minky, a 13y 9m old female neutered Jack Russel terrier, had experienced intermittent bloating over five weeks with occasional vomiting and one episode of dyspnea. She responded well to supportive medications, but the episodes of bloating recurred. Initially, aerophagia was thought to be the cause of bloating with a tense abdomen, but over time a cranial abdominal mass was consistently detected. Her local vets performed radiography and ultrasonography, revealing a multi cavitated abdominal mass, the origin of which was thought to be possibly spleen, liver or mesentery. Fine needle aspiration of the mass was inconclusive, suggesting a likely neoplastic lesion, but the lineage of the cells of origin could not be defined cytologically. Minky was then referred to London Vet Specialists.

At a consultation, our diplomate oncologist Dr Richard Elders, found massive cranial abdominal organomegaly, extending caudally and ventrally beyond the umbilicus. Differential diagnoses ranging from histiocytic sarcoma to splenic haemangiosarcoma to a possible massive presentation of hepatic carcinoma were discussed with the owners, and a contrast CT study for both staging purposes and to guide the surgical approach was advised.

Diplomate radiologist interpretation of our on-site CT study revealed that the heterogeneous mass was arising from the quadrate liver lobe of the liver, extending ventrally and caudally with dorsal displacement of the other viscera, and was merely abutting the spleen rather than invading it.

The density of the mass was similar to the rest of the liver, and there was no evidence of local lymph-adenomegaly or thoracic metastases. There was, however, a small, hyperattenuating, solitary nodule within the left medial lobe of the liver. The images were not pathognomonic, but very much supported a diagnosis of a massive presentation of hepatocellular carcinoma, and a resultant surgical approach, which was unlikely to be influenced by further attempts at pre-operative biopsy.

Following discussion with the owners, Dr Kovak McClaran, our Diplomate surgeon, performed a liver lobectomy, lymphadenectomy and biopsy of the separate liver nodule. The mass encompassed her entire abdomen and was removed by using a surgical stapling device. 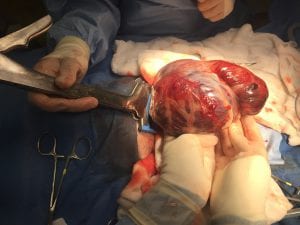 A blood transfusion was administered before and during surgery to correct her anaemia. Our anaesthesiologist, Dr David Elders, closely monitored her procedure, evaluating her blood pressure and heart monitor for any arrhythmias, and provided a comprehensive pain control plan. Upon removal, the mass weighed over 1 kg! 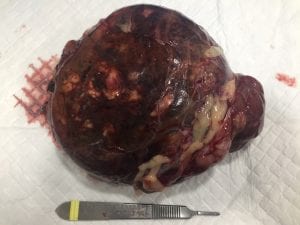 Initial immunohistochemistry did not reveal binding of a cytokeratin antibody, the lack of which is reported in some hepatocellular carcinomas, and so a wider panel of antibodies, incorporating a HepPar-1 antibody, is pending from Michigan University for a definitive diagnosis. Pending the additional immunohistochemistry, the pathologist’s working diagnosis is a low grade but poorly differentiated hepatocellular carcinoma, which is in keeping with the history and presentation. Despite neoplastic cells being found at the margin of excision, recurrence is an infrequent sequel, and the median survival time for patients with similar results to Minky has been reported to be more than 4 years, without further systemic therapy. Medical management without surgery in such cases tends to be associated with a survival time of 9 months. The separate liver nodule was merely a hyperplastic nodule; thus there is no current evidence of metastasis.

While interventional radiological techniques are suitable for small intrahepatic masses, the eccentrical location and size of this mass lent itself to surgery. Similarly, although radiation therapy has been used for similar masses in a recent canine-based paper and humans, such precisely targeted radiation therapy is not currently available in the UK. Currently, no systemic therapies have been proven to be successful in prolonging survival time or delaying recurrence for hepatocellular carcinoma, although some growth factor receptors that are targets for tyrosine kinase inhibitors have been reported. This lack of proven traditional systemic therapies reflects the experience of this condition in humans.

Minky has made a complete recovery, and her owners report a new lease of life in her. Minky has been discharged back to her local vets, and we have offered to see her again at London Vet Specialists every six months for repeat imaging of her chest and abdomen for monitoring purposes.