Life in the old dog yet

Early one morning Mrs Comet woke to find her beloved dog Harry in his bed looking sorry for himself. This was very unlike Harry, who was usually the one to wake Mrs Comet in order to go for his morning potter around the block. Harry was 15 years old, but was still almost as active as he had been as a puppy. This morning though, that didn’t seem quite the case. Whenever she tried to rouse Harry, he just lay back down. She took him straight to her vet who sent him on to London Vet Specialists after a brief ultrasound showed there was a tumour and a lot of blood within Harry’s abdomen. 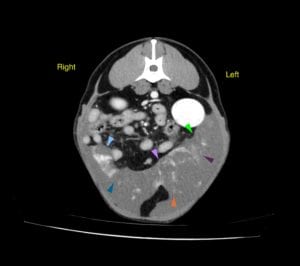 Before surgery to remove the problem, Harry needed a CT scan to identify any concurrent disease or the possible spread of the tumour. Sadly, unlike humans, animals won’t sit perfectly still for long enough for the noisy machine to take accurate images of the problem; pets, therefore, need sedation or a general anaesthetic. 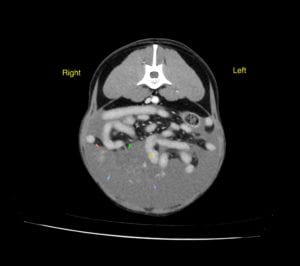 Harry was not in a good way- He had lost a significant amount of blood from the tumour and his heart was already struggling to provide enough oxygen to his vital organs. His blood pressure was very low- no wonder he didn’t want to go for his walk.

Harry wasn’t in suitable shape to be anaesthetised so LVS anaesthetist Dr David Neilson got to work stabilising Harry’s condition to give him the best chance of coming through the procedure without major complications. This involved rapid administration of fluids into the bloodstream to try to improve blood pressure and oxygen delivery to Harry’s vital organs. Further blood tests showed Harry’s blood was taking longer than normal to clot. If Harry’s blood can’t clot then surgery is not possible. The answer? The pet blood bank! 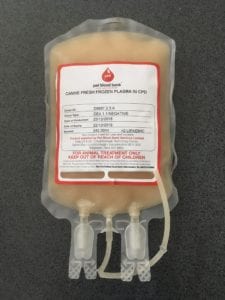 At LVS we have access to different blood products which have been generously donated by healthy pets and stored for use in case of emergency. In this case we used both Canine Plasma (to help clotting) and red blood cells (for carrying oxygen). With three types of fluid being administered, Harry started to look a bit perkier already; he could now be safely anaesthetised for his scan. Our radiologist, Dr Ian Jones was on standby to look at the images as soon as they were produced and he was able to advise that the tumour was affecting the spleen and fortunately there was no other significant disease visible. 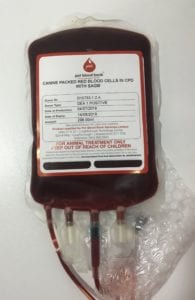 These surgeries can be challenging as very quick changes can occur which make the anaesthetic dangerous. A cannula was placed in one of Harry’s arteries which allows measurement of blood pressure in real time- problems can be identified and treated in literally a heartbeat! During the procedure, Harry’s heart developed an irregular rhythm which was swiftly treated with an antiarrhythmic drug. He also received infusions of drugs for pain relief and to support his cardiovascular system. Surgeon Janet Kovak McClaran operated at rapid speed – a shorter the time spent under anaesthetic is very important in these critical cases- and Harry was in the recovery room in no time!

Harry spent a further two days with us at LVS for some rest and recuperation where he was looked after by our vets and nurses. His blood count was returning to normal and he was happy and comfortable – time for Harry to go home!