Gnasher* is a plucky little French Bulldog puppy. She loves chow. Loves to chew. Loves chews!  Nothing escapes Gnasher’s jaws. She nom’d it all down, no trouble. Except, she’d not felt quite right after eating that milk bone. Not right at all!!

Gnasher presented to her local vets as she had been sick several times. Once food leaves the mouth it is carried to the stomach in a long muscular tube called the oesophagus. Gnasher’s vets were concerned that something might have gotten stuck in the oesophagus and decided to check by taking an x-ray (Figure 1). 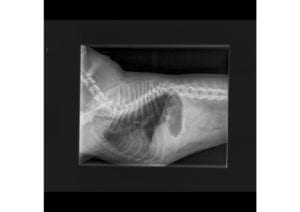 Figure 1: An x-ray of Gnasher’s chest.

There doesn’t seem to be anything stuck. So why is Gnasher still not feeling well? Gnasher was referred to London Veterinary Specialists to see our ECC consultant Dr Alex Hatch. He decided we should take a closed look by performing a computed tomographic or CT study. A CT is like a 3-D x-ray and provides much more information than a standard x-ray. So is there anything stuck in Gnashers oesophagus that we just couldn’t see in the x-ray (Figures 2 and 3. A video of the CT study is available on request).

There is!!! The CT study discovered a mystery object blocking the oesophagus. This was very serious indeed!! If a foreign object remains in the oesophagus too long, it could burst the oesophagus. If this happens, Gnasher could go into shock and die. There was no time to waste!

Dr Janet McClaran and her surgical team immediately set about removing the blockage. Dr McClaran used a camera called an endoscope to see the object, grab it with special forceps and pull it out. Here’s what she found (Figure 4).

It was that pesky milk bone!! Gnasher made a complete recovery after the bone was removed. Dogs cannot always be trusted to chew thoroughly before swallowing and unfortunately, not all dogs are as lucky as Gnasher. Spare rib bones are particularly difficult for small dogs to break up and swallow and are best avoided. Rawhide chews and pigs ears can also cause serious problems. A dogs eyes are often bigger than their tummy. Make sure they don’t bite off more than they can chew.

* The name of the patient has been changed.