A pain in the grass

Midge* is a Cockerpoo and he excels at it. A little while ago, Midge had a sore foot. It was his right hind foot and it had been sore for ages. A lump had popped up between his third and fourth toe so he had been to see the vet. He’d had some antibiotics and anti-inflammatories, but it was still sore. Midge’s vet was suspicious that there might be something stick in there, but how to find it? It was time to take a closer look using computed tomography or CT.

A CT scan of Midge’s foot revealed a large, poorly marginated mass within the dorsal sub-cutis adjacent to his fourth toe. Inside the mass there was a small, linear piece of what looked like foreign material. There was also severe swelling of the soft tissues between and around the third and fourth toes (Figures 1 and 2). 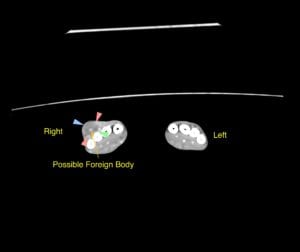 Figures 1: Transverse CT image of the hind paws. There is a mass (arrows) and a possible foreign body in the centre.

Figure 2: Sagittal CT image of the right hind paw. The possible foreign body is seen in the centre of the mass (arrows).

Dr Janet McClaran and her surgical team decided to explore the area surgically. Thanks to the CT scan they knew what to look for and where to find it. It didn’t take long before they found the cause of Midge’s sore foot, a grass seed! Grass seeds may seem harmless but can cause dogs no end of problems. They can get lodged between toes, up noses and even in the lungs. Once they get stuck they can often migrate and end up in all sorts of strange places. If they are left long enough they can abscessate. If these abscesses are in the lung or in the abdomen and they burst, dogs can die of the resulting sepsis. Midge made a complete recovery following the removal of the grass seed. Remember to always be on the lookout for grass seeds in your dog’s coat and if you see any, make sure you gently remove them before they have a chance to cause any mischief.

* The dogs’ name has been changed to preserve anonymity.