Our specialist-led team has saved the life of a young cat stricken with breathing difficulties.

Two-year-old Nala has made a full recovery after receiving two blood transfusions and a course of the drug Remdesivir to treat a diagnosis of feline infectious peritonitis.

Our internal medicine team led Nala’s treatment, which became a dramatic race against time to save her life.

Hospital manager Jack Davies said: “Nala was referred to London Vet Specialists with not a moment to lose. Her circulating red blood cell count was low at 18 per cent, compared to normal packed cell volume which should be between 30 per cent and 52 per cent. 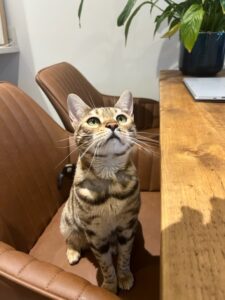 Two-year-old Bengal cat Nala, who has made a full recovery from feline infectious peritonitis.

“Nala received immediate supporting care in the form of medications and fluid therapy to make her a bit stronger, while thoracic and abdominal ultrasound scans were performed to identify the cause of her low red blood cell count.

“The ultrasound identified a pleural effusion (fluid around the lungs) which was impacting on Nala’s ability to breathe effectively.

“There were also lots of abnormally large lymph nodes found within her abdomen. These abnormal areas were safely sampled using an ultrasound-guided technique, with Nala under sedation, unaware of the procedures being undertaken and free from any pain.

“Unfortunately, her blood cell count continued to drop to a dangerously low level.

Our team suspected Nala was suffering from associative immune mediated haemolytic anaemia (IMHA), where her own body was destroying its red blood cells, secondary to an underlying disease process.

The underlying disease was diagnosed as feline infectious peritonitis and the course of Remdesivir was started.

“FIP is not transmissible to people but historically it has been a fatal disease in cats. In recent years, though, Remdesivir has emerged as a very effective anti-viral drug for successful treatment for cats,” added Jack.

“Three months later, we’re all delighted Nala is fully recovered, finished with all her medications and back to her old self.”