We removed a football-sized growth from a labrador

Eleven-year-old Sparky had been referred to us after his owners became concerned about his swollen stomach, sudden loss of appetite and alarming drop in weight.

A CT scan by LVS imaging specialist Dr Ian Jones revealed a benign growth of fat which was as big as a football and had displaced some of Sparky’s internal organs, including his kidneys, colon and small intestine.

Dr Jones revealed: “We were shocked to find a giant mass that was occupying the whole of Sparky’s abdomen and pushing all of his organs over to one side.

“It was a large, poorly marginated mass of fat filling the peritoneal cavity, which was displacing the kidneys dorsally, the small intestine cranially and the descending colon dorsally and to the left.

“The only treatment available in this remarkable case was exploratory surgery to remove the mass as much as possible.”

Dr McClaran explained: “The operation was challenging as the origin of the mass was unknown and some delicate structures, such as Sparky’s vital organs, important nerves and major blood vessels could have been encountered when removing a mass of this size.

“Additionally, the anaesthesia can be complicated, so we worked very closely with our specialist Dr David Neilson as we carried out the complex operation.

“Fortunately, at surgery the mass appeared well defined and was not invading into any of Sparky’s organs or blood vessels. 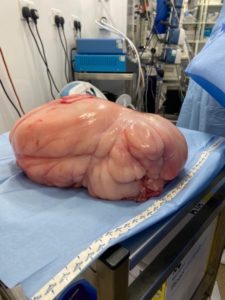 “We confirmed it was a giant intrabdominal lipoma weighing 5kg and the size of a football!”

Dr McClaran said the sheer size of Sparky’s growth was not the only surprising factor in the case.

She added: “Lipomas are benign growths which are quite common in dogs but the typical location is under the skin, on the outside of dogs.

“Sparky’s lipoma had originated in an atypical location on his inside but, luckily, surgery was possible to remove it and make room for his stomach to resume its normal function.

“Surgery was a complete success, so much so that Sparky had his appetite back soon after the operation and was enthusiastically tucking into his food again that evening.

“In no time at all he was able to return home to his family and his normal Labrador sized meals again so he’s recovered very well indeed.”