Asia is a gorgeous 5-year-old female Maine Coon cat with recurrent ear issues. She had a mild infection (otitis) of her left ear for several months that did not seem to completely clear. One day Asia came home after having a little wander in the neighbourhood looking almost like she was drunk (and no, she has not been in the pub recently!) Her owner immediately noticed that something was not quite right because she not only wobbly on her legs and looking dizzy, her eyes also were moving in a really fast way from side to side.

Asia’s mum rushed her to Vet 24, the 24-hour emergency centre for Village Vet and LVS, located in Belsize Village.  The vet did a physical examination and diagnosed her with nystagmus- rapid involuntary movement of the eyes.  The veterinarian suspected that Asia had “vestibular syndrome,” which is a disease that can be caused by a centrally (brain) located or peripheral (ear) problem. Animals with this syndrome usually present with a head tilt, ataxia (wobbliness) and nystagmus (involuntary movements of the eyes). The veterinarian performed an examination of her ear with an otoscope and found the likely cause of the problem-Asia had a mass growing inside of her ear, affecting the nerves. Luckily most growths inside the ears of cats are benign masses called polyps.

Asia was then referred to our specialist centre, London Vet Specialists, where we have state of the art hospital facilities, including a CT scanner, ultrasound, operating theatre, and a full team of veterinary experts.

A CT scan (a 3D xray) of Asia’s head was performed to outline the extent of the mass inside of her ear that was causing her pain and dizziness. Dr Ian Jones, specialist in diagnostic imaging identified a mass occupying the ventral bulla (middle ear canal). In the picture below we can see the part of the ear containing the mass outlined with a blue circle. 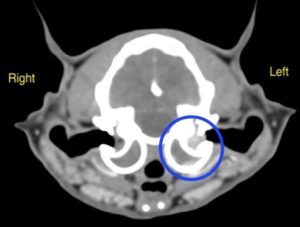 Surgery was therefore indicated to remove the mass and alleviate Asia’s headache. The surgery required is called Ventral Bulla Osteotomy(VBO). This surgery was performed by Dr Janet McClaran (Soft Tissue Surgery Specialist) to open a small window in the ear to remove the mass in its entirety. This is a delicate operation requiring miniaturised instruments and great care to avoid nerve damage. In the video below we can see how the surgical team removed the mass from Asia’s ear. A quite large mass trapped inside of a small cat’s ear!

Straight after surgery, Asia was looking much more comfortable and after 24 hours of hospitalization, she was discharged to continue her recovery at home with her sisters (two Main Coon kittens) and her owner. Final biopsy results confirmed the good news that the mass was benign (non-cancerous).

Here is the picture of Asia after the surgery, looking gorgeous and now pain-free. No longer dizzy or looking tipsy. Her family is very grateful to the LVS team that gave her beloved cat a new lease on life. 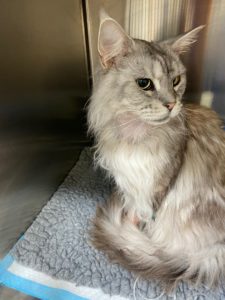