It didn’t take Specialists at LVS long to cotton on to the cause of a serious blockage in the intestines of a French bulldog.

They performed emergency surgery after discovering their patient had been snacking on a pair of socks! They had the patient sewn up very quickly and Nutella’s recovery went well.

Dr Janet McClaran, a soft tissue specialist and head of surgery at LVS, made the shock sock discovery during an emergency operation to remove a mysterious and dangerous obstruction from bulldog Nutella.

It seems naughty Nutella had gone scavenging for food and ended up eating the footwear when her owners weren’t looking, leaving them ‘footing’ the bill for the intricate and complex surgery.

Dr McClaran explained: “Nutella was referred to us at LVS because she had stopped eating, was vomiting regularly, losing weight and was dehydrated. “We immediately carried out blood tests, began intravenous fluid administration and our diagnostic imaging specialist Dr Ian Jones performed an abdominal ultrasound, which confirmed the presence of a foreign body. The image below demonstrates a piece of her intestine with the foreign material, demonstrated with the 4 arrows. 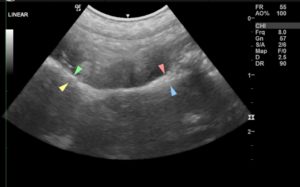 “Surgery was required as this type of blockage can produce a unique form of intestinal obstruction, as the foreign body can anchor itself around the base of the tongue or at the narrow end of stomach. Contractions of the intestine then help carry the remainder of the material through the intestines, which can progressively gather into accordion-like pleats along the object. “If left untreated, the intestine could develop perforations or tears, which can become an extremely dangerous situation.”

Dr McClaran and LVS surgical intern Dr Beatrice Hertel carried out the emergency surgery and discovered the socks were lodged partially in the stomach but had also extended into Nutella’s small intestines.
Two intestinal perforations were also identified, making surgery even more challenging and complicated.

Dr McClaran added: “Nutella’s perforations were in an inconvenient part of her small intestine in close proximity with the pancreas and vital blood vessels, so the risk of complications following surgery were very high.

Thankfully, all the material she’d eaten could be removed via an incision into the stomach (Gastrotomy) and we were able to repair the perforations without having to remove any of her intestinal tract.

Nutella was then hospitalised for two days because after such a complex intestinal surgery there can be many risks and complications. Gratefully, after 48 hours Nutella was eating on her own and very comfortable. 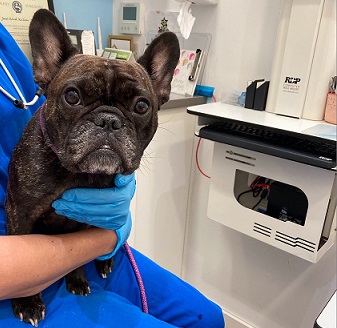