Former racing greyhound Dougie has defied the odds and triumphed after battling and surviving a rare complication following lung surgery.

The four-year-old, whose racing name is Savana Dougie, had been given only a slim chance of survival, but he recovered thanks to the team at London Vet Specialists (LVS). 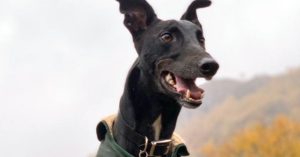 Initially thought to be suffering a cough by his owner, Dougie was found to have a chronic abscess in the lung, which persisted despite antibiotics and other medications, and surgery was required.

Dr McClaran said: “Greyhounds are particularly susceptible to this disorder, which prevents the blood from clotting and makes it extremely difficult to stop any bleeding.

“Dougie needed urgent attention – including receiving plasma, blood transfusions and oxygen – and was immediately transferred to our emergency and critical care [ECC] unit.”

Sam Stewart in the ECC team took charge and acted quickly to stabilise Dougie’s heart and blood levels, and administer pain medication. The former racer then received constant 24-hour care from the ECC team of vets and nurses.

Dr Stewart said: “The first three days were very difficult, but thanks to the teamwork of all the LVS specialists and staff, Dougie started to make a miraculous recovery.

“He was one tough cookie – and 24 hours after seven days of intensive care and hospitalisation, he was able to go home and continue his recovery and care with his new family. They tended to him for the next few weeks with lots of care and love.

“Dougie has made steady progress and has healed well, and now he can enjoy his well-deserved retirement.”