Near miss for Bailey after a family BBQ 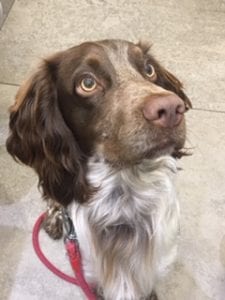 The imaging and surgical team at London Vet Specialists worked together last month to perform emergency surgery in a 1-year old Cocker Spaniel – and the results were far from appetizing!

Bailey presented to London Vet Specialists several days after eating a kebab stick at a family barbeque. Despite a trip to the emergency services at Village Vet Hampstead for some vomiting and diarrhoea after eating the stick, Bailey continued to feel poorly with no improvement after anti-nausea medication and pain relief. Initial radiographs (x-rays) of Bailey’s abdomen were taken when he first presented however no concerning foreign object or indicators of obstruction were seen. Despite supportive care, Bailey didn’t improve, and he presented for specialised imaging at London Vet Specialists.

An abdominal ultrasound was performed by Dr. Ian Jones who found something quite concerning floating in Bailey’s stomach – the infamous wooden kebab stick, last seen four days previously on the BBQ table! Dr. Jones commented on the usefulness of multimodal imaging in these cases, praising the advantage of abdominal ultrasound; “Non-radio dense foreign bodies such as wood are often impossible to identify using plain radiographs. In this case, the wooden kebab stick was visualised using ultrasound. The acoustic shadowing associated with the kebab stick (figure 1) is typical of a foreign body”

Bailey was immediately transferred to the surgical team at London Vet Specialists who whisked him into the operating room for emergency surgery. A highly specialised minimally invasive approach was performed by Dr. Janet McClaran to allow the removal of a 12cm wooden kebab stick from Bailey’s stomach (see figure 2 video below – if you’re not too squeamish!) via a laparoscopic-assisted keyhole surgery. The operation took just under an hour and Bailey recovered well, ultimately being discharged the following day. Bailey has made a full recovery, doing very well at home, and staying safely away from any future BBQ’s for the rest of the summer!